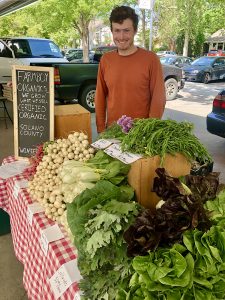 These budding farmers are bringing energy to the local markets, along with their commitment to the environment, connection to the community and the all-important social media savvy.

As the nation celebrates Farmers Market Week Aug. 7 through 13, it’s a great time to recognize the work being done to connect farmers and society, and to create a fair and sustainable food system.

Randii MacNear, executive director of the Davis Farmers Market, is as excited as they are. “There’s a flurry of interested, young farmers, and we are finding markets for them. That’s one of the reasons we do satellite markets, because it’s a good entry level farmers market for newcomers.”

Those satellite markets include ones at Sutter Davis Hospital, Sutter Medical Center in Sacramento, and UC Davis. Newer vendors may also find a start at the Wednesday afternoon market in Central Park. If they have success there, they could earn a spot at the flagship Saturday morning market.

Twins Andrew and Eric Walker, 25, grow diverse organic vegetables on five acres outside of Winters. Their parents briefly farmed that property when they started Eatwell Farms in 1993. Later, Lloyd Johnson of Lloyd’s Organic Produce grew his vegetables there. After Johnson retired last year, the Walkers leased it.

Eatwell was one of the original vendors at the Ferry Plaza Farmers Market in San Francisco, and the twins grew up going to the Ferry Building on Saturdays with their dad, Nigel Walker.

“He was so instrumental in our love of farming, without pushing us too much,” they said in an Instagram post dedicated to their dad, who died in 2017. It was appropriate that they started their journey on the same land their parents leased.

MacNear said it’s fun and encouraging to see the commitment and determination of these new growers. “This is the next generation of farmers coming in, bringing the Yolo County food systems forward.”

For those interested in farming but lacking the family history, the Center for Land-Based learning is a great place to start. The Woodland nonprofit offers seven-month training programs, farm business incubators and apprenticeships to support beginning farmers in their first four years.

The Davis Farmers Market collaborates with CLBL, helping many of the program’s graduates get their start. One product of that program is Paul Boulware of Picnic Table Farm. He grows produce on a CLBL plot in Woodland. 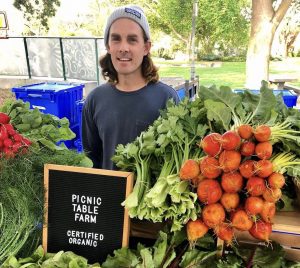 In spring 2021, Boulware and his family started selling produce online, with customers picking up orders each Friday in front of their Davis home. Both he and wife Caitlin grew up in Davis, and raise their two young children there. By April 2022, he had enough of a following to earn a spot at the Saturday market. They sell lettuce, spinach, kale, beets, turnips, radishes, kohlrabi, carrots, basil, parsley and more.

MacNear said farmers like the Boulwares have a clear vision for their product, how to present it and how to market it. They know the value of the internet, social media and Venmo, and are great at arranging their produce into eye-pleasing displays. Seeing these skilled entrepreneurs bolsters her confidence in the future.

One of the smallest and newest of those growers is Amy Masselink, who started selling her Katahdin Farm flowers in June at the Wednesday Davis Farmers Market.

After 25 years as a documentary filmmaker for National Geographic and PBS, Masselink was ready to land. She moved to Davis from the East Coast about 10 years ago, and wanted to work where she lived. As she got into gardening, she realized her dahlia-growing hobby could be a new career. 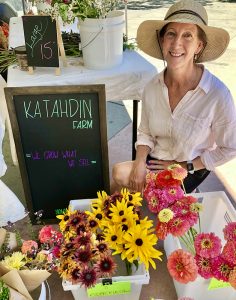 After taking a six-week course in flower gardening, she started leasing a fifth of an acre from Pacific Star Gardens in early 2022. Soon, she was growing more than 420 varieties of dahlias, along with a few other filler flowers.

Debbie Ramming, who owns PSG with her husband, helps manage the Davis Farmers Market, and knew there was a need for a Wednesday flower vendor. Masselink started selling her flowers there in June, and will continue through the bloom season till October. The goal is to lease more land, and start a Consumer Supported Agriculture subscription program.

“I love that I’m working in my home town, and developing regulars,” Masselink said on a recent Wednesday. It’s different than the constant changes of people and places she experienced as a filmmaker.

For National Farmers Market Week and beyond, the Davis Farmers Market is a great place for farmers to grow, and community members to go. Year-round in Central Park, thousands gather each week to shop for what is grown, raised and made locally. Since 1976, the market has connected and supported communities, area agriculture, farmers and artisan food producers. It educates the public about nutrition, sustainable agriculture, and the local economic value of buying food and products directly from the producer.

The Davis Farmers Market’s signature markets are Saturday mornings and Wednesday afternoons in Central Park. Since 2000, its Davis Farm to School program has supported the Davis Joint Unified School District, providing farm- and garden-based education, increasing farm-fresh foods in school meals, and reducing solid waste through recycling and composting. For more information, visit https//davisfarmersmarket.org or visit it on Facebook or Instagram.